My boyfriend is boring, am I crazy for wanting to dump him? – Lady

12 years of relationship, two abortions and he dumped me to marry someone else – 40 year old woman cries for help

This is the terrifying moment a man tried to snatch a two-year-old girl from a play park in Berlin, before being confronted by witnesses and forced to return her.

The 44-year-old, who has not been named, led the girl away from the park around 7.30pm on Sunday while her mother was distracted in conversation.

But he was followed by a 27-year-old mother and a shop owner who confronted him on camera, before leading him back to where the girl’s distraught mother was searching for her.

The man was subsequently arrested for being drunk, but police later released him saying ‘conditions for issuing an arrest warrant were not met’. This is the terrifying moment a 44-year-old man, who has not been named, was caught snatching a two-year-old girl from a park in Berlin before being confronted by witnesses

Heike S, who spoke to German newspaper Bild on the condition they change her name, said she first noticed the man speaking to the girl near the entrance to the play park, and began watching because ‘the girl and the man didn’t match’.

Suddenly the man took the girl by the hand and began running away, prompting her to follow despite having her own two-year-old girl with her.

READ ALSO: Mother drowns trying to save son in Germany

The girl did not resist, but Heike was convinced the man was not her father. When he began getting away she enlisted the help of local kiosk owner Zoran Z, 44.

Zoran managed to catch up with the man and confronted him as another witness filmed on their cellphone.

Zoran said he asked the man whether the girl belonged to him, and that after a brief pause he admitted to taking the child. 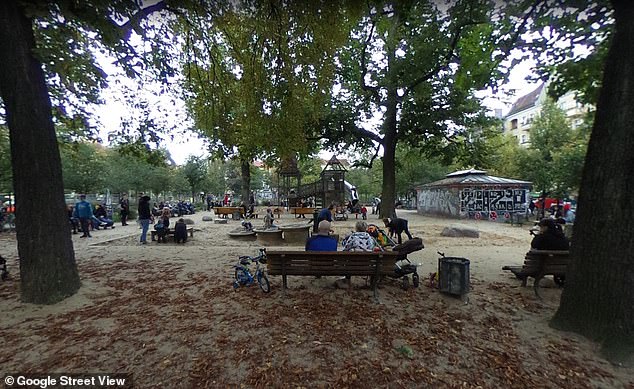 Mother Heike S. said she saw the man talking to the girl outside this play park while her own mother was distracted, before he suddenly took her by the hand and led her away

‘I love children. I can’t understand how mothers and fathers leave their children at home with some caregivers,’ Zoran recalls the man saying.

Zoran then forced the man to walk back to the play area – carrying the girl on his shoulders – where the panicked mother was frantically searching for her daughter.

In the video, the kidnapper can be heard calmly telling Zoran: ‘I think children are simply the most important thing. Children are our future, aren’t they?’

Once back in the park, Zoran asks the girl: ‘Is the mom here in the park? All right, that’s where we’re going, right? We’re going to mom, right?

‘You sit up there. You have to look where she is. You have the best view. OK?’

Eventually mother and child were reunited, and police arrived to arrest the man – who refused a breath test but was later confirmed to be drunk with a blood sample.

He was known to officers and has mental illnesses, Bild reported, but is not a known paedophile or s3x offender. 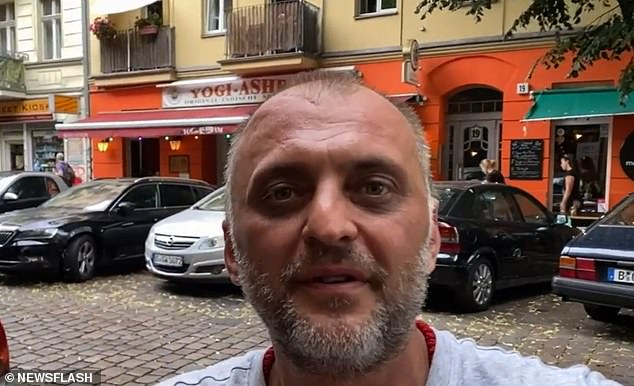 Kiosk owner Zoran Z, 44 (pictured), also joined the pursuit and confronted the man – who admitted the girl was not his before forcing him to return her

Police said they were forced to release him because the conditions for an arrest warrant were not met.

The case has since been passed to a specialist child crimes unit which is investigating on suspicion of attempted abduction.

A local psychiatric unit has also been notified, and is examining whether the man is eligible to be placed into a secure unit.

Locals have now placed warning signs outside the playground, but Heike is worried about running into the man again.

‘I imagined what would have happened if that had been my child,’ she said.

‘Now I also know that the man is back. That he could appear in front of us again at any time. That he might recognize me and my daughter.

‘Why didn’t the police put up a notice on the playground? That scares me.’

I am Wealth O. A, B.Sc (Chemistry), Delta State University, Nigeria, Diploma (Basic Marine certs), Regional Maritime University, Ghana. Married with kids. Marriage and Relationship Counselor, writer and entrepreneur.
@@MarriageChroni2
Previous Teen rapist jailed after dad marches him into police station and force him to confess
Next Nana Yaa Brefo explains why she can not give birth again

Lady narrates how man who took a girl shopping ended up stealing her iphone 11, then fled unnoticed